Jon Bull of Targetcraft Archers has been short listed for the Kettering sports personality of the year!!

Visit Kettering Borough Council website to see the write-up and view the other candidates.

You can vote for Jon by email at: sportsawards@kettering.gov.uk and put his name in the subject box. Voting closes at Midnight on Tuesday 30th October 2012.

A win for Jon would be great for Archery in the county so get voting!

Wrenn School in Wellingborough, home of Wellingborough Open Archery Club, has commissioned a sculpture to stand at the schools Doddington Road site as a permanent momento of the 2012 Olympics. Of all the olympic sports played at the school, archery was chosen for the theme. On Monday 2nd June, the sculpture was officially unveiled by Archery GB Chairman Dave Harrison where it will stand as an impressive advert for our sport. 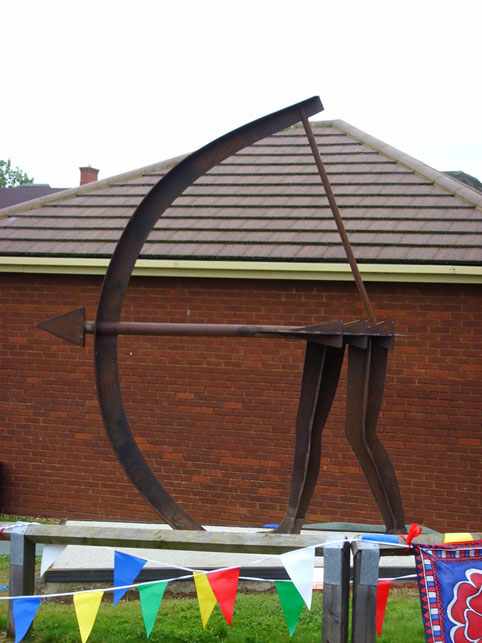 Northamptonshire Sport instigated a programme as a part of the build-up to
the Olympics based on the year 2012. The programme is aimed at getting 20
Companies taking part in 12 sports. On the 20th June WOAC hosted, on behalf
of NCAS, an archery session for 7 companies who expressed an interest in
trying archery. Each team consisted of 4 members who were instructed in the
basics of shooting followed by a team competition. From the feedback it was
enjoyed by all and there were quite a few enquires for information about
clubs throughout the County.

Archery was the first sport on the programme and to date the most popular
event, equalled only by golf on team participation numbers.
The winners of the competition – 1st Northamptonshire Sport A team, 2nd YMCA
Trainers, 3rd Northamptonshire Rejects.

Thanks must go to WOAC club members who gave up an evening’s shooting to
help and the rest of the club who were shunted to the far side of the field.

On Monday the 5th of September I traveled to London with Eric Jackson the County Development Coordinator for Archery in Northamptonshire. As part of this year’s 150th anniversary of Archery GB and as part of the celebrations, Eric and I attended an event held within the grounds of the Houses of Parliament.

The purpose of the visit was to raise awareness and the profile of archery with a number of MP’s and Lords. The idea was to potentially secure much needed funding to further the sports development.

Shooting in the shadow of Big Ben, Nicky Hunt of the GB archery squad was on hand to demonstrate the skills of archery and she was actively encouraging the MP’s to have a go. Many did on the day expressing their enjoyment in doing so. At least one Northamptonshire MP, Louise Mensch MP, took part.

Both Eric and myself thoroughly enjoyed the day’s events this was a once in a lifetime opportunity and one I have been incredibly proud and privileged to have taken part in. Eric said he felt the day had been extremely successful and that a very positive and worthwhile outcome was achieved.

Northamptonshire has a new archery club! Corby Archers is now officially up and running after a committee was formed at a meeting on 28th July 2011.

The club will meet every Monday evening between 18:30 and 21:00 at The Kingswood School on Gainsborough Road, Corby.

For more information about the club visit: www.corbyarchers.org