John Inkley of Nene Bowmen, and Tim & Frances Bull of Targetcraft Archers took part in the GNAM (Grand National Archery meeting) at Lilleshall from 24th to the 26th June.

Whilst John has been a regular at this event for several years it was a first for Frances and Tim.

“its something we have wanted to give a go for a few years and finally got there this year despite having our own 2 day club event on the following weekend.”

The weather was pretty good for the 2 days of the York/Hereford rounds and although we did get a bit of rain on the Friday at the start of the Long National it stayed warm.

The competition is based on the combined score from the first 2 days with the Long National being based on handicap adjusted scores. 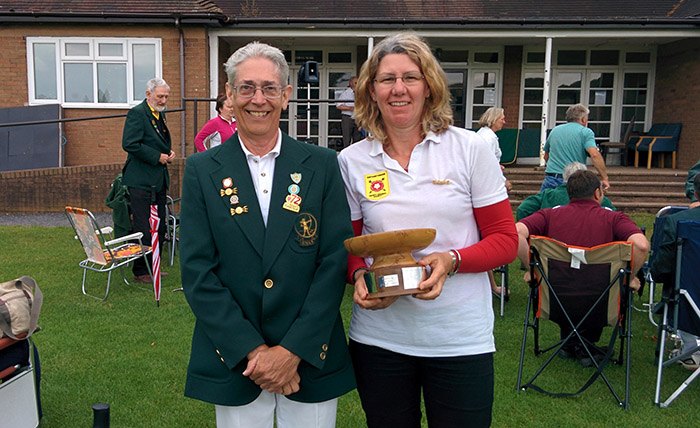 The atmosphere was so relaxed and friendly. it was a real pleasure to be there. We stopped at 11am for refreshments, tea/coffee/sherry (!), then lunch had to be at 12.30 (12.45 latest). We would have stopped regardless of wherever we were in the round Smiling face with smiling eyes. After about an hour for lunch we were later given refreshments again during the afternoon.

After the Long National of Friday we had a 2 hour wait for the Presentation. Although not expecting to be winning anything we decided to head to the pub for lunch and get back to see the trophies.This event is a real piece of our Archery history and some of the trophies go a long way back.

John Inkley did brilliantly and won another award to add to his collection, coming 3rd in the Gents Recurve.

What a surprise for me… to come 2nd in the Ladies Compound and to also win the cup for “Ladies over a Certain Age”… It was called out but I won’t repeat it. I am now the proud owner of a GNAM Spider (as they are called.)

Congratulations to those Northants archers who made it onto this years Archery GB UK Target Ranking Lists.

To qualify, archers must complete three ladies/gents WA 1440 rounds and two WA 70m rounds all from shoots with World or UK Record Status. If more rounds than required are shot, the best scores are submitted. In addition archers are required to shoot an associated Olympic round head to head, but the score is not included in the total.

We’ve had another busy period with plenty of new record updates.

Jon Bull of Targetcraft Archers has continued his great start to the indoor season with a new Junior Gents Compound FITA 18 record of 570, at Hawks WRS event on 29th October. The previous record of 565 was held by Josh Hall of WOAC since February 2011. Jon has also improved on his own Junior Gents Compound Portsmouth record with 582. The new record came on 18th November at Targetcrafts open Friday evening session. Jon’s previous record was 580 set only a few weeks previous. As well as the single Portsmouth, Jon has also improved on his own Double Portsmouth record with a new combined score of 1156. This came at Clophill Archery Clubs Junior Portsmouth competition on 12th November. Jon’s previous record of 1134 stood since December 2010.

Kirsty Stephenson of Northampton Archery Club has broken the Ladies Longbow record for a Short National round with 103. Kirsty shot the new score during a club target day on 1st October at Sywell Range. The previous record of 67 was held by E Goodwin of Kettering Archers since July 2003. Also on the same day, Tina King also of Northampton Archery Club set a new Ladies Barebow record for a Short National round with a score of 160.

Kayleigh Dunkley of Kettering Archers has two new Junior Lady Barebow records. The first came back in August at the 3rd Caswell at Wicken where Kayleigh shot 768 for a Metric III. The second record is for a Worcester round with 180, shot at Kettering Archers Open Worcester Tournament on 16th October. Kayleigh herself held the previous record of 165 .

Tim Bull of Targetcraft has broken the Gents Compound record for a Double Bray II with a combined score of 566. The previous record of 564 was held by James Mason of WOAC since December last year. Tim shot the new record during a open club target evening on 21st October 2011.

David Plater of Nene Bowmen has set a new Gents Longbow county record for a Worcester round with 142. David shot the score at a club target day on 14th November.

Angela Plater also of Nene Bowmen has set a new Ladies Longbow record for a FITA 18 with a great score of 211 achieved at a club target day in October.

Lincolnshire were the winners of the coverted Thoresby Trophy at this years EMAS Senior Inter-counties Team Tournament held on 4th September at Washingborough near Lincoln. The host county won the event for the first time in the 53 year history of the shoot.

Northamptonshire were once again short of a full team which might have seen us put in a good challenge. Dean Edwards and James Mason finished 1st and 4th respectively in the gents recurve standings. Shahram Montasser also shot very well finishing in 6th place with a new PB of 1027.