The awesome Derek Bett of Kettering Archers archers has broken his own Gents Barebow county record for the WA1440 round with a ridiculous score of 1106.

Once ratified this should also be a new EMAS regional and national record.

Derek also improved his county records for the 70m distance with 279, and 50m distance with 275. The new records were achieved at the UK record status, NCAS 1st Caswell Trophy Shoot on 5th May 2019, once again kindly hosted by Kettering Archers. 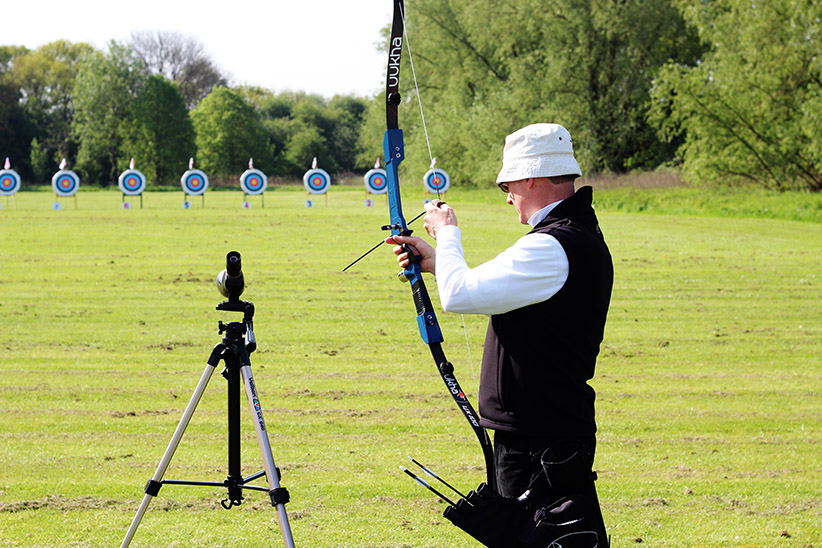 Derek scored 266 for a Bray II round, and 259 for a Bray I round on the same day at Eagle Bowmen of Bedford’s Bray-Tastic Tournament on 20th November 2016.

Once rattified by ArcheryGB, Derek will hold a total of five national records.

Derek Bett of Kettering Archers has yet again improved on his own gents barebow national record for the York round with 951.

Derek acheived the record at Jolly Archers Autumn Shoot on 18th September 2016. His previous record score of 943 was set only in June of this year at the 165th RLSAS Leamington & Midland Archery Meeting. Derek also holds the national record for the Double York with 1890 also set in June.

Derek Bett of Kettering Archers of achieved two more barebow national records (yet to be ratified). Derek has improved on his own previous national record for the York round with 943, and in doing so also broke the Double York national record with 1860. These are obvioulsy also new county and regional records. Derek acheived the scores at the Leamnington & Midlands Counties 165th Archery Meeting hosted by the Royal Leamington Spa Archery Society on 11th & 12th June 2016.

We’ve had another busy period with plenty of new record updates.

Jon Bull of Targetcraft Archers has continued his great start to the indoor season with a new Junior Gents Compound FITA 18 record of 570, at Hawks WRS event on 29th October. The previous record of 565 was held by Josh Hall of WOAC since February 2011. Jon has also improved on his own Junior Gents Compound Portsmouth record with 582. The new record came on 18th November at Targetcrafts open Friday evening session. Jon’s previous record was 580 set only a few weeks previous. As well as the single Portsmouth, Jon has also improved on his own Double Portsmouth record with a new combined score of 1156. This came at Clophill Archery Clubs Junior Portsmouth competition on 12th November. Jon’s previous record of 1134 stood since December 2010.

Kirsty Stephenson of Northampton Archery Club has broken the Ladies Longbow record for a Short National round with 103. Kirsty shot the new score during a club target day on 1st October at Sywell Range. The previous record of 67 was held by E Goodwin of Kettering Archers since July 2003. Also on the same day, Tina King also of Northampton Archery Club set a new Ladies Barebow record for a Short National round with a score of 160.

Kayleigh Dunkley of Kettering Archers has two new Junior Lady Barebow records. The first came back in August at the 3rd Caswell at Wicken where Kayleigh shot 768 for a Metric III. The second record is for a Worcester round with 180, shot at Kettering Archers Open Worcester Tournament on 16th October. Kayleigh herself held the previous record of 165 .

Tim Bull of Targetcraft has broken the Gents Compound record for a Double Bray II with a combined score of 566. The previous record of 564 was held by James Mason of WOAC since December last year. Tim shot the new record during a open club target evening on 21st October 2011.

David Plater of Nene Bowmen has set a new Gents Longbow county record for a Worcester round with 142. David shot the score at a club target day on 14th November.

Angela Plater also of Nene Bowmen has set a new Ladies Longbow record for a FITA 18 with a great score of 211 achieved at a club target day in October.